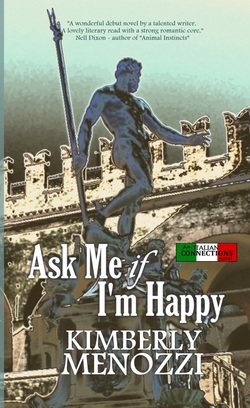 He awoke to the soft coming and going of her breath on his chest. He kept still, waited and then felt the touch of her breath once more. Her forehead rested on his pillow, close to his mouth. A few strands of her hair tickled his lips, stirred by his breath in the darkness.

All the while, Davide kept his eyes closed, shaking with awareness of her closeness. Theair beneath the bedclothes was a trifle too humid and he could smell a hint of her scent, the salt of her skin.

Then he leaned forward, just enough, and pressed his lips to her forehead in a light kiss. She stirred and he withdrew carefully, touching the tip of his tongue to his lips to taste her salt there. He coughed and she stirred again, her movement permitting their mingled scents to drift out from between them.

She could always ask me to stop.

Keeping his eyes closed, he slowly reached up to touch her hair and brushed it back gently, then kissed her forehead once again, lingering for a moment longer. She sighed, a quiet sound amongst the rustling of the bedclothes, and he let his hand drift slowly, stroking her hair down to her shoulder.

He placed a light kiss above her eyebrow, then traced her profile tenderly with his nose, breathing in the perfume the hotel soap had left on her skin. He wondered idly when she had washed her face. Was it before he had joined her the second time? Or after he’d fallen asleep on the sofa?

Kissing her cheek as softly as he could, he drew back when she shifted position next to him. She turned her mouth up to his, beckoning with silent want, and he found her lips unerringly in spite of his self-imposed darkness.

Her response was better than he had dared anticipate. Emily received his kiss without any reservation, returning it with gentle eagerness instead. She encouraged more, slipping ever closer to him and moving to accommodate his first, hesitant caresses sliding blindly along her body, over the soft flannel pajamas.

He felt her anxious trembling mirroring his own while they continued their initial timid kisses and explorations of each other. Her pleased shiver when his fingertips grazed the nape of her neck made him smile; when he kissed her ear, she stifled a giggle that made her body quiver next to his.

“Davide,” she whispered against his shoulder a few moments later, her breath warming him through his t-shirt. She pressed her lips to the fabric and trailed soft kisses up to the bare skin of his throat, lingering over the hollows pleasingly. He felt her lips vibrate with his own pleased hum before she broke away to kiss his lips again; she permitted his more probing efforts now, her tongue slipping over his in teasing return each time.

Still he kept his eyes closed, unwilling to chance breaking the fragile spell between them. The night air seemed cooler yet, but their arms and legs twining beneath the sheets warmed rapidly from their sweet, inadvertent friction.

Emboldened, he slipped a hand under the blouse of her pajamas and her stomach quivered, ticklish, at his touch. Instead of a giggle or a sigh this time, she gave a small gasp and he hesitated.

Not now, not yet, Emilia, please…

The “Oh” undid him. That single soft syllable and the need and want that filled it, coupled with his name. He’d never heard his name spoken in such a way before, not like that, not meant for him alone to hear.

She moved to kiss him once more, her hand over his, guiding him to cup her breast. He exhaled against her neck, unable to help the eager sound that escaped him. He relished the sensation of her breast in his hand, the flesh so warm and supple, filling his palm as though molded to a perfect fit. Her nipple grew erect beneath his caress and her flannel-clad thigh was invitingly soft as well, against his own firming flesh. He briefly regretted that he hadn’t taken off his trousers and then she was gently pulling at his t-shirt. Davide drew away from her to tug it over his head and toss it toward the sofa even as she pressed her palms to his chest, her lips following close behind.

Available in ebook and paperback.